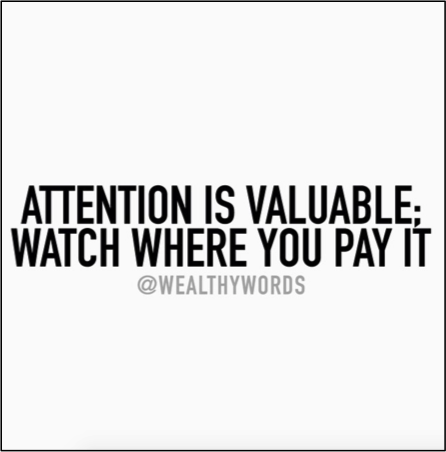 Are You Focused On The Right Goals?

As I was scrolling through my Instagram feed this morning, a post from a friend stood out.

It reminded me of so many conversations I’ve had with clients, colleagues, and friends over the last year. It seems that everyone is at an all-time high level of “too much to do and not enough time.” Between personal and professional priorities, there are just so many things demanding our valuable attention, and the valuable attention of our teams. And because it is common for organizations to struggle with this, we often are able to determine, very early on in a client engagement, if the team is unclear on priorities and where they should be spending their time, energy, and brainpower for maximum impact.

A few weeks ago, I was meeting with a group of senior executives at a large nonprofit. After a head-scratching discussion about the activities and actions of the “boots-on-the-ground” teams in the field, one member of the team said something that could have passed as insignificant, but actually carried a great deal of insight into a key dynamic. She said, “The number of team captains the Field Teams recruit is such a prominent and public metric, which is why they’re all focused on it.” And just like that, she had articulated something very impactful and applicable to every organization.

Regardless of who you’re trying to motivate or guide; your team, a functional group within the organization, your peer-to-peer fundraisers, your volunteer committee members, or anyone really; if you want to influence their behavior determine where you want them paying their valuable attention for maximum impact, measure it, and publicize the heck out of it.

It seems so simple, but can be hard to get right at first, so here are three tips to get you moving in the right direction:

First, make sure the metrics you’re measuring and publicizing are actually the things that will lead to the end goal. You can make some logical deductions, but be sure that the dots really connect in the way you think they do. When the end-goal is mission-fueling revenue, one can presume that if the Field Team can get more team captains within the program, the team captains will bring in more team members. If we have more team members, we’ll have more potential fundraisers. If we have more potential fundraisers, well, some of them are bound to generate more revenue. While the logic is sound, it’s a long chain. Make sure you’re able to prove the relationship between the metric and goal, and that you’re not just focusing on a vanity metric.

Second, confirm that these metrics are also the ones with the strongest relationship to the goal. It isn’t enough for the dots, or activity, to just connect back to the end-goal. They also need to be the ones with the highest potential to impact that goal. An example of this done poorly, is an organization who is solely focused on increasing registration numbers, so much so that they spend almost all of their time and energy trying to get anyone and everyone to register for their event. As a result of this misstep they omit a crucial piece of the puzzle – acquiring people that actually care about their cause and are willing to leverage their networks on their behalf.

The point is that the prominent, public metrics matter. They are what teams focus on, and often what organizations base personal performance on. So the question is, of the 652 things your team could be paying attention to, what are the few that matter most and are you articulating their importance?

Finally, by “few” I mean no more than three. At Plenty, we have three measurements that are leading indicators of how well we’re operating and building the business. Everyone on the team can tell you what they are. We work towards them, as a team, every week. Because of that, we all make a conscious effort to pay our valuable attention to activities that will show up in one of these three measurements. There aren’t twenty-five. Heck, there aren’t even seven. There are just three things that we put front and center. What are your three primary objectives and how can your team band together to achieve them?

Let’s face it – time is our most limited resource. Which is why it is increasingly important that we focus our energy on the activities that have the greatest potential to help us achieve our goals and fulfill our missions. Make sure you have validated the metrics your team is focused on, that there is alignment around them, and that they are front and center as a means of driving the right actions.

Spend your time wisely and focus on the metrics and areas of your program that are the most important to achieving success. Continue to explore these areas in our e-book "The Participant Gears", which highlights the three most important components of peer-to-peer events and how you can improve each one.