Do you remember what you did in your spare time when you were in the seventh grade? If you were anything like me, you were busy taping photos of cute boys to the inside of your locker or onto your bedroom walls while singing Shakira songs into a hairbrush microphone. However, if you cut to the seventh-graders currently involved in the programming of the Chicago nonprofit {she crew} you will be pleasantly surprised (and impressed) as they have ditched the hairbrush microphones to instead, have thoughtful round-table discussions on social justice movements like Black Lives Matter, and then go on to turn those discussions into plays with impactful messaging and narratives.

I recently sat down with {she crew} founders Jessica and Meredith to learn where they were finding these extraordinary thirteen year-olds. And as it turns out, their students aren't the only extraordinary women in the group. Jessica and Meredith are talented visionaries with a dream for empowering young females across Chicago to explore, dream, and do. I have no doubt that among their young female tribe lie future House and Senate members, a few Pulitzer Prize winners, chefs of Michelin-starred restaurants, and Academy Award nominees. Their work is inspiring, their vision is expansive, and their funky vibe is contagious.

Get to know Meredith and Jessica via my personal interview with them below...

Let’s start with the basics. Who are you?

Jessica: I am Jessica London-Shields and I am 30 years old. I’m from San Francisco, California but I have been in Chicago for 12 years.

Meredith: I am Meredith Montgomery. I am 27 years old, from everywhere in Texas. I have been in Chicago for 4 years. And we have lived together in Lincoln Square for two years.

Describe the work that you do. How did you get started? You can tag team this!

Jessica: So, we do year round empowerment and youth leadership development programming for girls and gender-variant people in Chicago. Our main age group focus is early adolescents — so twelve to fourteen years old — but we do have a good portion of our programming available for students who are growing with us. So students who start in the programming with us when they are twelve can progress into internships as they age. We do our leadership development and empowerment programming through expressive writing, performing, and communal cooking. We are currently in the process of creating an intersectional podcast to be led by our youth. Our major partner, and where all our programming is located, is the Jane Adams Hull House Museum on the UIC campus. It is the perfect partnership for us and matches up with our mission perfectly because Jane Adams was a feminist and activist.

Meredith: Well, and she also valued the idea of childhood and being able to play and she was really interested in round table discussion and communal eating, all of which are ideals that we uphold. We’re about holistic support for people. People need more than food and shelter. They need expressive platforms and creative outlets, which is what we provide. The Hull House is also a central location, which makes it accessible for all participants.

Jessica: We also provide free transit cards for our girls and all the meals the girls eat at {she crew} programming are free.

How was {she crew} born?

Meredith: I created the method that became she crew in 2010. I was in my undergraduate program and I got a huge grant to figure out how to get people who were outside of the Arts into the Arts. So I was basically tricking people into playwriting.

Meredith: It started with the idea of first having round-table discussions and then taking those discussions away and journal writing about the discussions. Then we would take the journal writings and turn them into a performance. Eventually, this idea became a required freshman class. I then moved to Chicago, unemployed and broke. A friend got me a job at an alternative high school and I was able to recreate my method there. I started teaching this method all over Chicago, at schools and at different organizations that were hiring me to teach. After a while, because this method is difficult to use within a school system, we decided that we needed to go independent with it. 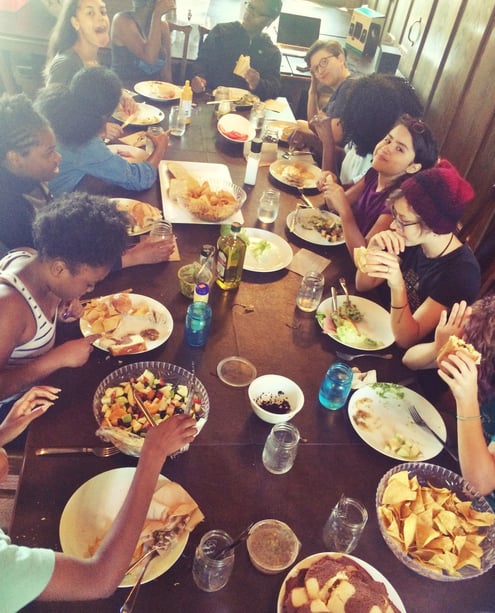 Jessica: Can I jump in? There are not a lot of organizations for girls in Chicago. When we started the organization, we did research on programming in Chicago for girls — middle school girls particularly — and they weren’t there. There used to be and then they shut down.

Jessica: Outside of {she crew}, there is not a lot of age specific programming for middle school girls. They are either the way older person in the group or the way younger person. But this age is a super formative time in your life — you probably still know all the lyrics to your favorite songs from 7th grade.

Oh, I definitely do.

Jessica: We all do! Starting at age eleven for girls, we go through a huge synaptic growth spurt, specifically in the pre-frontal cortex. That means that the connections that aren’t used very much die to make room for habitual connections. The habits and the interests and views that you learn at that age can become hardwired and remain for a very long time. The majority of {she-crew} girls have experienced multiple layers of oppression. They live in places that harbor a lot of sexism. They learn that they are supposed to accept gender roles. So, we wanted to create a space for the weird kids. Or not the weird kids! We wanted to create a space for them to explore their identities and discuss and figure out everything that is going on. Young people know everything that is going on with Black Lives Matter, for instance, but don’t have the adult spaces to talk about it. They don’t have platforms to have conversations. So you need to have spaces to talk about these things.

Meredith: We need to offer spaces for young people to try things on. How are we supposed to expect them to feel comfortable navigating the world if we aren’t letting them safely talk about these things and explore who they are? So that’s the basis of what we are doing: creating a community for them to have these conversations.

What are the top challenges or difficulties you face in your job/field? What kinds of solutions have you created or envision creating?

Jessica: I have two answers. In terms of program, we want to give a lot of individual attention to our students. So, we’ve really had to brainstorm how we can expand. When you have smaller classes, a lot of foundations will say why don’t you accept more people? And it’s because there is a difference in how much you can do or learn. Also, intimacy becomes a factor. And we aren’t at the stage where we can train other people in the method — we’ve begun but we aren’t there yet. Our solution to that is the podcast, which we will begin in 2017. That will expand our reach in terms of impact and in terms of bringing {she crew} to girls who aren’t even in the position to be in an extracurricular like this — maybe they don’t live by a train or bus line and can’t get there or don’t have a parent who has time to research a program for them. This podcast was our solution because we want to make the {she crew} method fully accessible our community and make space for socially conscious youth. To give a quick synopsis of what the podcast will cover, it will be divided in 3 segment: The first segment will be coverage of a social issue; the second segment will be a few student’s journal writing/expressive writing; and the third segment will be a peer advice space. It will all be written and produced by our students.

Another issue is consistent fundraising. We are a multidisciplinary program — part leadership development and part Arts. That can make it difficult for us to be within the box of what a particular fund is designed to support. We are still figuring out how to fix that one.

Meredith: We need to know how to pitch it properly. Our holistic organization works. We have the proof and testimonials and...

Jessica: DATA! We have data!

Meredith: We have students and parents who love it and who will tell you it has impacted the lives of the student and their entire families and even their communities. One of our students organized a rally for gentrification in Pilsen last month. If we only did one or the other — leadership or the Arts — it wouldn’t be as impactful. Our model allows students to realize their potential and move outwards with it. So we are going to throw that spaghetti on the wall and see if it sticks.

Spaghetti on the wall?

Meredith: When you cook spaghetti, to see if the noodles are cooked through you throw a piece on the wall. If it sticks, it’s done.

Jessica: I had a roommate who did that.

Meredith: my students and Jess.

Jessica: Great answer, Mer. The students are extremely inspiring and help motivate you to continue creating programming for them.

What’s the title of your upcoming biography?

Jessica: I’ve been thinking about this one for a while! I’d call it: Reasons Why My Neck Hurts

Genius. It would fly off the shelves.

What do you envision for the future of {she crew}?

Jessica: And we hope the podcast we are starting goes really well!

Meredith: {she-crew} has its own life now! It has become it’s own thing. I would love for students who I have seen grow up to then come back and teach this. That’s so exciting and what a gratifying way of knowing that the program really works.

What are you passionate about?

Jessica: Women’s issues and intersectional feminist issues have always been important to me, and that’s been manifested in {she-crew} a lot. I’ve also found that this age group that we are focusing on is going to turn into a long-term passion for me because it is a group that is at a very formative and vulnerable stage. I want to be of some sort of impact for these students.

What does being an “idealist” mean to you?

Jessica: I think being an idealist is trying for the most perfect version of your project, whether or not it fits the typical structure.

Meredith: I think just asking the question: Well why not? That’s something that has been a life force for me personally. I am a rebel in that way. I’ve always asked, why can’t I do that? Why can’t I have that? Why can’t I teach how to cook and then an hour later do a guided visualization and then turn that into a performance piece two hours later? Why not? {She crew} was born out of the question "why not", and this is where we are now.

[Editor's Note: A big thanks to Jessica and Meredith for their time and willingness to participate in this interview. To learn more about {she crew} visit their website here.]

Previous Story
← The Gifts of Gratitude
Next Story
The Real Campaign →