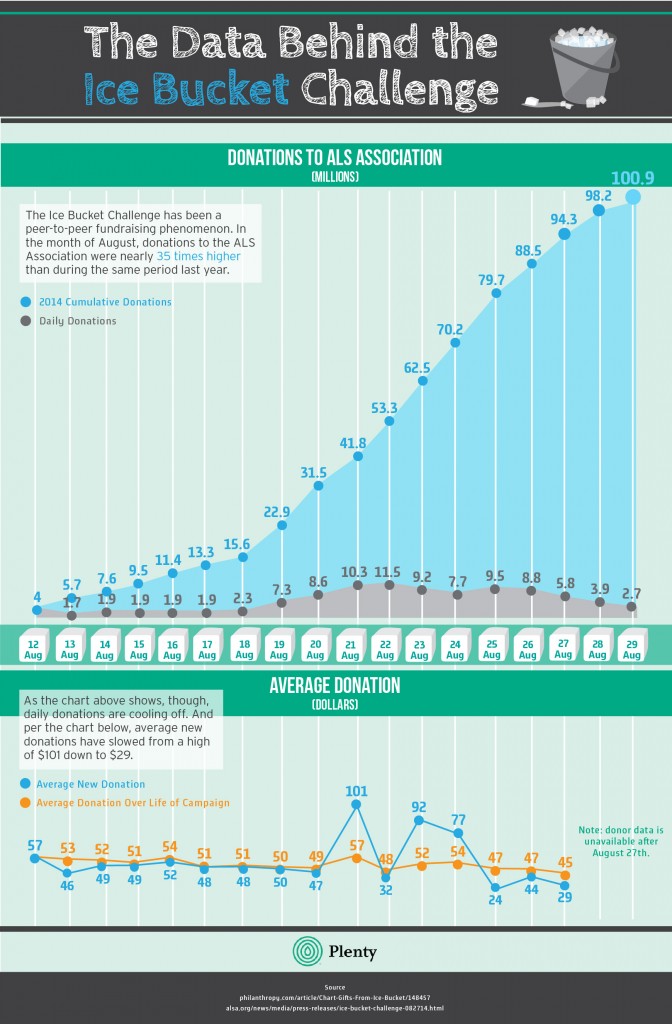 The Peer Networks Behind the Ice Bucket Challenge

Unless you’ve been living under an igloo, you know that the Ice Bucket Challenge has become not only the social media phenomenon of the summer but the new benchmark for how peer-to-peer fundraising can create massive impact. The Ice Bucket Challenge has been the perfect blend of accessible, fun activity; understandable, compelling cause; and networked social proof. In other words, it’s something easy that people want to do, for people they want to help, in a way that allows them to show and enlist their friends and family.

The Challenge continues to grow and we imagine it will have a tail well into the fall. At the same time, momentum is slowing significantly as the peer-to-peer networks that the Challenge has been tapping into become saturated. The graphic below shows the huge growth we’ve all been watching. But it shows something else, too — as the Challenge taps into new audiences, the average daily donation has decreased markedly.

This makes sense. The nature of the Challenge is such that most people will only do it once. The most cause-motivated constituents were early adopters, and they tapped into their close friends and family first. As the most mission-aligned supporters propelled the Challenge, they activated friends who were less closely connected with the cause of ALS. And so on, and so on, until the people taking part now are likely less doing it to help ALS and more so simply taking part in the social media event of 2014.

And in fact we see this pattern in the data. As a whole, the donors taking part now are donating less than those from several weeks ago.

It will be fascinating to watch this trend play out over the fall.

The next step for ALS organizations will be to try to more personally engage the many new donors who are only peripherally part of their network. And as we’ve written before, the next step for other organizations looking to emulate even a small part of this success is to start not with brainstorming a fun activity, but by identifying their network of constituents and thinking about what motivates their most aligned supporters. We grow by inspiring our supporters to engage the general public, not the reverse.

Explore the power of peer-to-peer fundraising and how to utilize your supporters' networks. Download our free guide, "The Family Tree of Peer-to-Peer Fundraising"!

Previous Story
← Harnessing Data In Peer-to-Peer: Success Factor #6
Next Story
After The Ice Buckets: How To Date Dave →